So for the last several weeks since the 1 year marker on April 1st (no joke!) I’ve been seriously thinking about how I would like to travel, what I would like to see, and how I would go about doing so. I’ve been reading several interesting blogs out there about RTW (Round The World) trips and one set really caught my eye – minimalist travel! A couple blogs that really made me think about it are Gear List – 12 Month Round the World Trip by Dave Danzeiser as well as this informative site.

Now, there is one “big” difference between myself and many other travelers that blog about their minimalist travel experiences. Emphasis on “big”. While I work on overcoming that hurdle, I know it would be difficult (and very unhealthy!) to achieve the same size as most of them in the time left up to my departure date. Most folks taking on the minimalist challenge (such as the two from the links above) usually do so with bags that are 26-30L in size so I figured I should probably look for backpacks around the 40L mark due the difference in clothing size.

This brings us to what I’ve been obsessing about for the last couple of weeks.

The first and foremost item a world traveler going on an extended (13 month!) RTW trip needs to get is sturdy, well built luggage. For the past several weeks I’ve had backpacks on the brain, researching various options and sizes, seeing what would get by on most airlines. I’ve looked at some amazing products including the Tom Bihn Smart Alec, the Minaal 2.0, and the Osprey series of backpacks including this (not-so) little gem right here: the Osprey Farpoint 55. 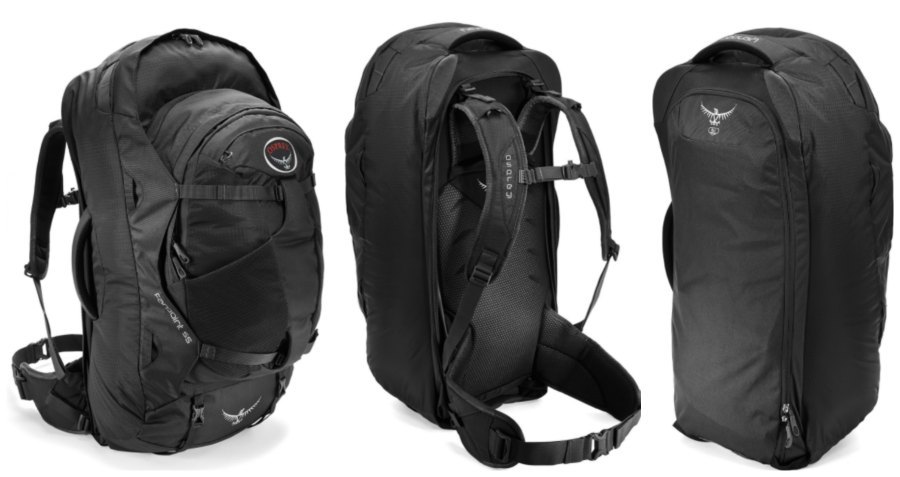 At 55L, the size of this beauty isn’t exactly small – it might challenge quite a few overhead bins on certain airlines. That’s why most minimalists try to keep to the 40L and smaller range. However, there is one little trick this puppy has – as part of the 55L volume, it includes a detachable 15L day pack which acts as a much smaller back pack as well as letting you carry on the now much smaller 40L portion of the main pack. I’ve read quite a few reviews where this was successfully used on various discount airlines with the large pack being the carry on and day pack being a personal item.

With that plan in mind, I just ordered it from Atmosphere and should be receiving it in the next week. Once I do, I’ll test it out and try to see what I can fit in there and how well my plans for minimalist travel could go. Look forward to my next post for an update!