So with 13 months traveling the world, of course I’d have a plethora of options on how to get where I’m going. Flying places, of course, is the most efficient way to travel long distances from country to country especially if there are oceans in between. However, in certain areas, I’ll be looking at alternate modes of transportation that allow an appreciation of smaller locales and views of the countryside that cities cannot offer. In this instance, my first over land travel will be in Europe.

At the beginning of my planning, I pretty much was dead set on renting a car after getting to mainland Europe and windingly making my way through various countries (primarily south Europe) before finally dropping off my ride in Greece. What could be more flexible and easier than that? Even the Auto Europe website had a relatively good deal via Hertz for about $2000 including full insurance and theft protection. However, making sure I understood it all, I eventually read the fine print. While the website did allow the rental to technically take place and seemed to allow me to fully book the rental (I didn’t actually click on booking it), it turns out I had a bit of an issue. 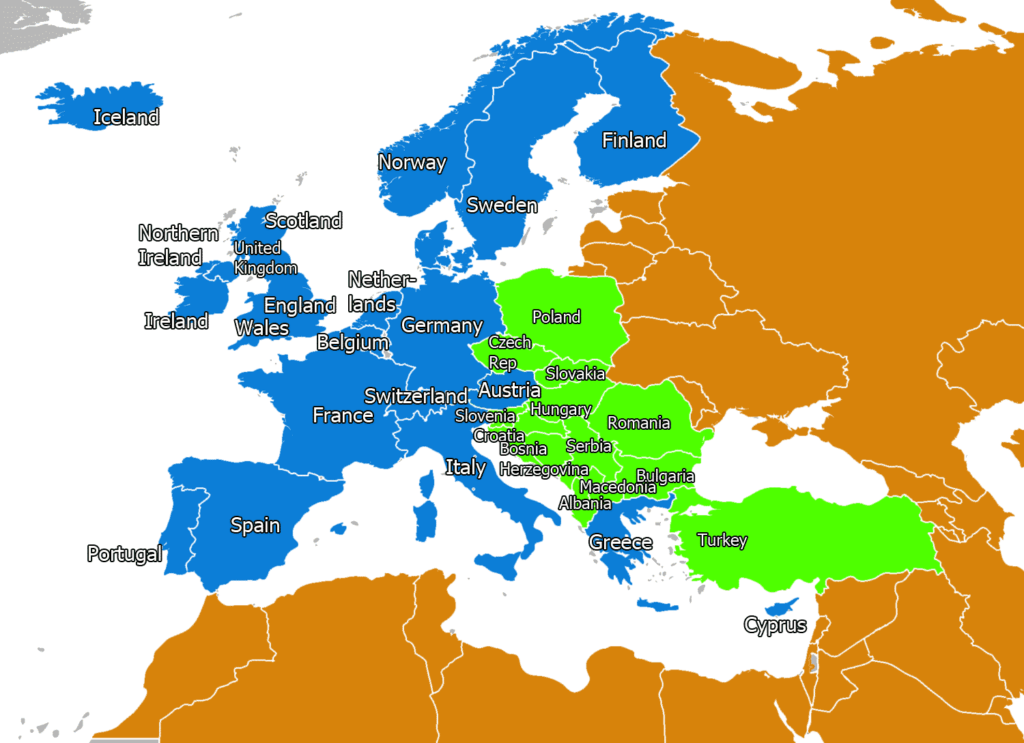 Big Block of Eastern European Green right in the middle of my plans!

Now, being half Serbian, I didn’t really think of the issue I would run into when I wanted rent a car in Paris and drive it to Athens. Shouldn’t be a problem! The website loved that my departure and arrival cities were both in Western Europe. Except for that fine print. For some reason (hint hint: higher rates of crime and corruption), Western European auto rental companies aren’t too keen on one of their vehicles entering and/or traversing through an Eastern European country.

At first, I trawled through some forums looking for any exceptions to this. Perhaps there was a company that was willing to assist with this type of trip. Unfortunately, I could find much of anything. As I was still stuck on the idea of renting a car, I did find a couple hints that gave me some hope. If I rented in Paris and returned the vehicle in Munich, it would then be much easier to find a vehicle in Germany to go into neighbouring countries such as Czech Republic. However, that vehicle could only end up in Croatia or Hungary as the furthest south. That left Serbia and FYROM in between Hungry/Croatia and where I wanted to get to in Greece. So I’d have to rent another vehicle in Hungary just to get to Serbia and then into Greece eventually.

Now, as I am going to be in Europe for approximately 3 months, three sets of rentals wasn’t onerous. What would be onerous is the cost. I saw that initial estimate of $2000 suddenly balloon to almost $6000 as each trip tacked on an extra 400€ one way fee as well as much higher insurance and liability charges the further east I traveled.

This was way more than I was willing to spend on this leg of my journey and it was quite frustrating being unable to figure out something cheaper that would not include air travel from region to region. On top of that, I hadn’t even calculated costs of fuel as well as parking in many of the major cities. I even read how horrible parking was to find in some of those cities. This was not looking good.

Then I happened to stumble upon a blog (https://blog.rail.cc/belgrade-skopje-thessaloniki-train/) that talked about the overnight train from Belgrade to Thessaloniki. What a brilliant idea! I could do only two car rentals and have my cousin pick me up from near the Hungary/Serbian border. Then I paused as the gears in my brain slowly turned. But what if instead of renting a car twice, I just traveled by train for the whole of mainland Europe and forget about all the fuss of fuel and parking?!

Well, that’s how I ended up finally deciding that I’d take the rail throughout Europe. I could travel around through the countryside, but without having to actually drive, I’d have my hands and mind free to do other tasks such as read or sleep. Also, it would potentially allow me to interact with other travelers instead of driving by myself. This idea was getting better all the time!

There are a couple options I can pursue including the fantastic Eurail Global Pass (https://www.eurail.com/en/eurail-passes/global-pass), which has various options including number of trips or time period (up to 3 months). However, this benefits people the most when they are traveling pretty much every 2nd day or more often. I would be stopping in some locales for several days. Also, in some countries, it is almost a requirement to book ahead a couple of weeks at least as trying to get a ticket the day of would be impossible. I ready many horror stories about folks trying to get a ticket the day of on France’s national railway operator, SNCF, and being told they had to pay full price as they only had a limited number of Global Pass seats available – even though the train eventually pulled away half empty!

I eventually figured out that purchasing tickets as needed would be the best way for myself. Not only was it cheaper by about 500€, but it also allowed me the flexibility to easily hop on a train that still had empty seats.

So I guess if there is a lesson to be learned from this planning adventure, it’s that don’t get too set in your decisions as there might be a better option that you might be not seeing.